When he was two Mister and I shared an apple in the car.  I had a few bites and then said, "Here you go, buddy, you can finish it."  When we arrived at our destination I opened his door and said, "Can I have the rest of the apple?"  He said, "No."  I said, "I just want to throw it away."  He said, "No, me ate it."  There was no apple to be found, not even a seed.  He ate every last bit.

Yesterday afternoon he ate an apple for snack.  He asked me to cut it.  I peeled and cut the apple.  Then I gave him a spoonful of Biscoff spread.  He ate all of the pieces of the apple and licked the Biscoff off the plate; his face was covered in spread from forehead to chin.  When he was done I said, "You must like the apple better without the peel."  He said, "The what?"  I showed him the peel.  I said, "The outside of the apple, its called the peel."  He said, "No, me like it."  I said, "Yesterday when I cut you an apple without taking the peel off, you barely ate it."  He said, "Oh. Sorry Mom."

Today at lunch time he told me he wanted another apple, with spread, and yogurt.  I said, "OK. I will peel it."  He said, "No, I will do it with my suter sharp teef."  Of course he has super sharp teeth, why hadn't I thought of that?  He went to the fridge and got an apple.  He removed the sticker and stuck it to the side of the kitchen table.  He moved his step stool to the sink, rinsed the apple, and then took a seat at the table.  I put yogurt in his bowl as he worked at his apple.  He removed and ate all of the peel with his super sharp teeth.  Then he said, "OK, mom.  You cut it now?" 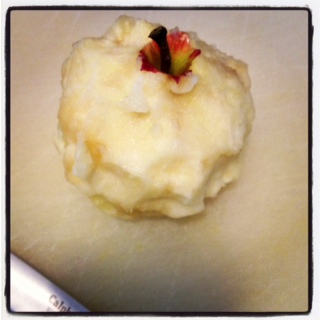